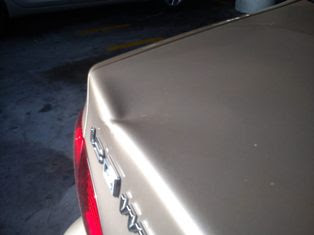 Never thought I experience road rage in Malaysia. Although I made some mistakes but there was no cause for the other driver to get so riled up. I may have tried to rushed out a little but I stop and let the other car pass. But he got so angry he slowed and blocked my way so i overtook him and he has to show his finger. After overtaking him he sped his car after me but all i wanted to do was get to Tesco. So while trying to get my car park ticket the mad driver got out and slammed his fist on my boot and yelled at me saying something about he got a baby in his car. I think he just simply lost it!

If he truly was concerned about the welfare of his child he should just have let it go when he horn his car and I stopped from rushing out. So who is more wrong here? A person itching to fight is letting his emotion controlling him.

Anyway there is now a nice little dent in my boot and left me with a bad after taste in my mouth. Now thinking about it, very likely he must have been stressed out taking care of his baby. But to show his road rage and anger tells volume that he is likely unfit to teach good moral to his kid. I shudder to think that such bad behaviour gives a very bad example to his child when the child grows up.

To show that might is right is totally wrong and letting anger to lead to sin is such a gross violation to good morals.

Sigh! What is this world becoming? Perhaps the Discovery channel about end of the world by year 2012 would come to pass when you look at the anger and intolerance in this world today with each faction claiming their way is right and to enforce it so with such violence and suicide bombers and such makes you wonder this is really the end of days scenario as foretold by biblical prophecies playing itself out to its final armageddon outcome. Also made me want to train up more on my self-defence fighting skills but usually the best defense is to run or diffuse the situation and avoid getting hurt.

Wish I took a picture of that mad person or took down his car plate number and report him to the police. That would really prevent him from doing such road rage in the future. Unfortunately I was rather not keen to come out from my car and face an unstable mind.

One of my facebook friends mentioned that, he notice most guys with cars that have the "baby on board" decal or car sticker are the ones that drive like mad person. As though having that "baby on board" sign gives them the license to drive recklessly and the right to vent their road rage on other road users. Sigh! Such is the violent world today.

I encountered the same issue & got a small dent on my bonnet @ last Friday. The road bully, a botak guy, he punched my car so hard..I wonder if his hand hurt?! He was driving Innovar, WTG 1880... mad guy!!!

I would think this mad people with some serious mental disorder would likely have a sore hand after punching so hard on the metal of the car. Cause when I tried it lightly it felt painful. Of course at the moment of anger, the road rage guy adrenalin was pumping high, so he may initially feel no pain. But when the adrenalin wears off, the pain will come in. It would be nice to think that they suffered a fracture in the process too, yes?