Funny Boss Day Saying Why You...

Funny boss day saying why you make appointment so late that after meeting over you go home directly. Duh? And what is wrong with that? It is up to customer to determine the time and it is not always you can get earlier appointment all the time. Also in addition is the workaholic culture so inefficient that for the sake of boss imposing their rule they are contributing to the increase carbon footprint of the world. By making the appointment later (which is also sometimes on request by customer) I worked an extra hour in the office which is extra productivity for the company and saves me an extra hour on the commute back to office which contribute to waste of petrol and spewing CO2 to the atmosphere just to show my face and say, "Hey, boss I'm back!" without doing anything else, go back to car and take the hour long drive home. This goes to show what Peter Drucker (quote, "a manager is promoted to a position of incompetancy") says is true all along and it is what is on most employees mind about middle level bosses way of thinking in enforcing policy whether the policy is made up by them or laid down by predecessor or higher up who has a narrow view of things. Duh? Let's see what other funny boss day saying that boss can come up with.

Well out with the old, in with the new, and not any better. The old boss passeth the baton over to the new one. Altogether I've experience 4 expat bosses each with their own idiosyncrasies and eccentricities. However I do have a better feeling after each changes with the worst one with the 2nd boss, and now on the 4th with a much likable personality. However, he was still answerable to HQ, so there changes and implementation that were still not much to be desired. Instead of recording the incoming time by one of the staff, we now use a punch in / out timer recorder. 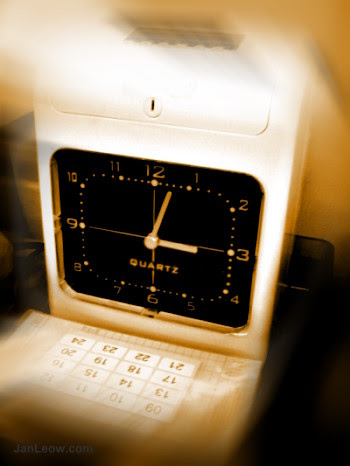 I don't know what's wrong with my HQ who insist on such devices on all staffs. If you were admin and there is overtime pay involve, ok, it makes sense. But if you are doing sales and marketing where your in / out time cannot be measured, the recorder did not make any sense. So for those times you came in late due to appointment, or leave early or not able to punch out as you could not make it back to office, you need to submit application form (preferably before doing it, but how do I know whether I can or cannot make it back to office?). And really, if you have to go outstation on business trip, you can't even punch in/out either, so submit a form too. Thus making more paperwork for everyone concerned.

When they wanted to implement the time recorder, they thought they could make an excuse or a reason to implement it. They thought that without a timer recorder, the insurance company would only pay compensation for during your working hours in the office. But when we informed that the insurance coverage was 24 hours irregardless of where you were, they were dumbfounded. Anyway, HQ already want to implement the time recorder for a very long time. No need to find excuses to slowly break it in to staff. Anyway which way you want to gently break in the time recorder still would not go well with us staff anyway.

For a small branch outfit with so many constraints do make working rather difficult. If the office has many staffs, of course a timer recorder would be required, but it should exclude the sales staff (which I know many companies do not enforce it on their sales staff)

Anyway, just have to live within their rules and bend it where possible otherwise, it would certainly be tough to follow rules to the letter. It was said, "rules were meant to be broken". This was probably one of the situation.