I would say only 10 of the robot mecha (price tag in silver) were easily obtainable while the rest you litterally have to slog through to get it. With the worse ones being the Korean robots which was virtually impossible to get unless you were willing to pay real money for it. Of which I believe was totally not worth it at all. 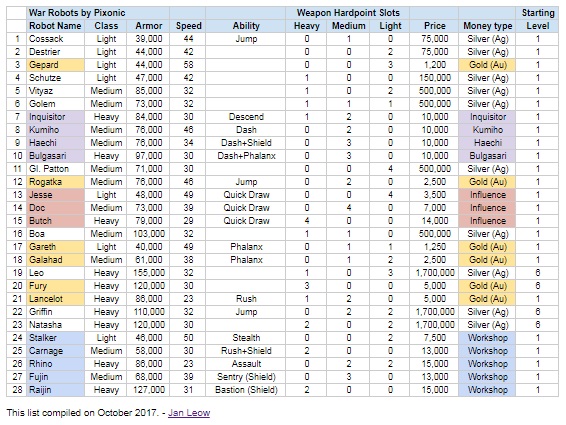 The silver (Ag) currency was the most easily obtainable in the game, thus the 10 robots listed price in silver meant it was easier to obtain. I would consider robots sold using gold (Au) currency including the influence currency (obtained by converting gold to influence points) as one of the more difficult to obtain. Robots that uses worshop points to obtain just took a little longer time and those points uses silver, so a matter of patience and you would eventually collect enough to buy the robot of your choice.

As for the special jigsaw component points (I call them jigsaw because of picture they use), were the worse of the lot to obtain. The component currency was separated such that each robot (including those weapons using jigsaw component currency) has their own version of component currency. To collect 10,000 of their own type of currency requires winning it from the black market lottery. That would litterally take forever to get enough currency to purchase any of the robots (or weapons for that matter). I don't hold much hope of getting to try out any of these robots. And it is probably why I hardly see any of these robots being used in battle.

In many of the game battles the most common and popular robots to see being used in the field were Griffin, Natasha, Leo, Gareth, Galahad, Stalker, Carnage & Fujin. And possibly the most popular ever is Griffin as it would most certainly be one of the first use robot when starting a game, despite that it didn't have a heavy hardpoint slot, it could still kick up a mean firing power when paired with high damage arsenal in its 2 medium and 2 light hardpoint slots.

The choice of selecting which robot to use would depend on your strategy and tactics. Each robot had its advantage and disadvantages. At the most, robots would have a maximum of four hardpoints. From what I could observe, for some game balance between the powerful robots, if an ability was given, one hardpoint would be removed. Thus trying to make the most devastating possible robot would not be that easy. For survivability most would go for the medium and heavy robots.

However I did find a use for Cossack (and noticed some players did that too), and that was to use it as the first robot to capture beacons due to its faster speed and quick 5 seconds recharge on its jump ability. Just don't expect it to survive when attacked by the opposing team!

As your gameplay progress, you may start accumulating lots of silver. That's when you might decided to obtain all the silver priced robots and test out each of it and see how they fare in the battlefield. As for the difficult gold / influence / workshop / component currency priced war robot versions, you just have to carefully decide which would fit into your battlefield strategy.