Having played Pokemon Go for the better part of 1 year and 2 months, I have decided to call it quits. It’s been quite an interesting game, but Niantic kept changing its game. The death knell came when one of the updates cause the power up to be less effective. Normally the power up increase the Pokemon CP by between 30 to 40. But the update cause the CP to increase only about 20. As you try to push the Pokemon strength and power to higher and higher CP, it takes more candies and stardust as well available powerup arc to do so.

By making the gain so little, I started to lose interest in the game. It was getting difficult push the characters up to a higher level. And with a lower CP, it sure drag the game a lot more. Although later Niantic did change back the CP power up increase to about 30-40. I have already given up altogether. 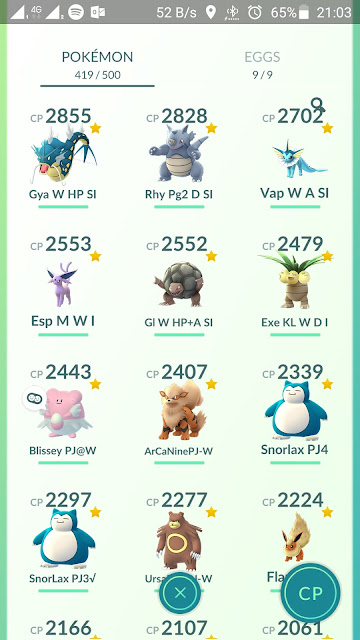 Playing Pokemon Go was rather interesting because it requires you to move around the city to catch Pokemons and find Pokestops to gather the necessary equipments and look out for gyms that you could take down. You just can’t play this game at home unless you are one of the few rare players with a Pokestops or gym just next to your house! The challenge was interesting. And once in awhile my son would tag along and do the honors of battling down those gyms, catching and collecting Pokemons!

I think he knows more about Pokemon since he would watch the cartoon series. He said he would take over my character. However that would be highly unlikely since the mobile phone is always with me. Eventually he too lost interest with the game.

The idea of moving around searching for the elusive rare Pokemons is like collecting stamps and coins. With the added element of gym battle to test out whose character was strong appealed to gamers. As for making you healthier for walking more? Nah, I ended up driving more and parking by the road side to battle some gym located in remote parts of the city. This is probably not so good for the environment for spewing out more smog.

Still I did managed to get some of the coveted Pokeys like Snorlax, Blissey, Gyrados, Rhydon, etc. But I didn’t manage to get the Dragonite, Charizad or the Tyranitar. The were still quite a lot of gaps in my Pokedex collection. Only the most hardcore player would be able to completely fill it up! Additionally playing alone without friends did make playing it difficult.

To halt playing the game, there was some minor withdrawal symptoms. My brain was geared to recall which locations have Pokestops and Gym and passing by some places would trigger my memory recall. I think this is good memory training against dementia. Eventually the urge to whip out my mobile and boot up the game began to wind down.

Additionally, me still being a gamer, I decided to go for one of those mecha robot games. Playing in the comfort of home is so much better! Much to the chagrin of my missus as she wasn’t so keen of me playing Pokemon, and now another game?! Playing games wasn’t quite her cup of tea!