The choice of weapons is up to individual style and of course affordability based on your currency that you have. Silver priced weapons were the easiest to procure. Next easiest would be the workshop point types, the gold price and the most difficult would be the jigsaw component priced versions. 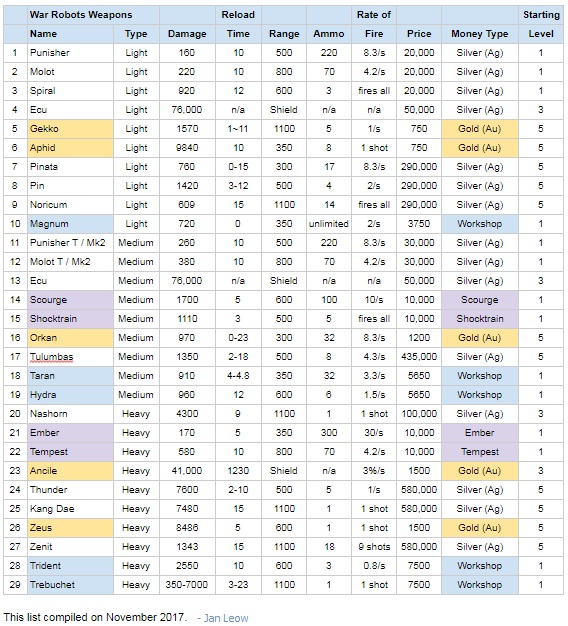 As you progress in the game you would amass a certain amount of destructive weapons in your inventory. Even as of this writing, I have mostly only silver priced weapons, a couple of gold priced and workshop point weapons. Maybe I'm at a disadvantage to other more powerful opponents but that didn't mean you couldn't beat them. There were still the very powerful Thunder and the Pin, Pinata could cause quite massive damage when used effectively. Not to forget the basic weapon Molot & Punisher. These could really dish out a lot of damage to your opponent's robot.

Some things to note while selecting and using the weapons, are you going for same range weapon or would you prefer differential destruction across the ranges? Usually I would fit weapons of the same range, and other times I might fit some with longer range for sniping and more blasting power as the opponent robot approaches. Taking note of your weapon range would help you to avoid getting shot at by the shorter range while still blasting them to bits. On the other hand if you were going for CQB (close quarter battle) style, your short range might mean your robot getting shot at first before you get a chance to blow them to smithereens. Dodge and attack might be a tactic to use in this case.

The reloading times of the weapons also affects your ability to fire in a sustained manner. Dodging in cover to let the weapon recharge before popping out again would be your tactic. Sometimes I use different weapons that has different sustain firing and reloading, which provide me with a longer sustained firing though the damage would be reduced while some of the weapons were recharging. How you want to mix and match is entirely up to you!

Here's an idea for light weapon Noricum or Spiral or Aphid. Use GI Patton robot and load them all with the same weapon. Instead of discharging all in an Alpha strike you could lob off one weapon at a time with a couple of seconds in between. So that while one reloads, you could lob off another volley from another. This provides an almost continuous firing stream and less wasted shot from missing the opponent's robot from that one single full blast. The damage may be less, but it would certainly be very distracting and irritating for the player suffering from your continuous barrage!

For those who love artillery bombardment with Zenit & Noricum, you could foil their shot a bit by moving left to right and vice versa. Long-range bombardment might make you feel safe but wouldn't get you that much score and takes much longer to knock out the opponent's robot. Having a robot with only Zenit or Noricum leaves your robot vulnerable when the opponent combatant robot gets in within insde the 300m range making such weapon totally useless. You could still save yourself a bit by moving away and making sure you have at least 300m between you and the approaching opponent and hope that your bombing would smash them out before they get to you!

Enough said! Procure what you could from the store, win some from the keys lottery system if you get lucky (but don't give too much hope on that). Mostly just grind yourself up with gold (oh, so, so difficult to accumulate) and workshop points to get some nifty blasting weapon for your War Robots!