Anyway, the War Robots Event is a good chance to obtain items and robots quickly without having to go through the long tedious wait for amassing gold and workshop points. However don’t think this would be an easy task. The War Robot event task list shows the difficulty to obtain some of these coveted robots and weaponry. Having played my first event games during their Halloween event, I didn’t had a clue on what were the next item on their task list and the task required out of each step.

This time round, I scrounge around for some info and found out there were similarities between pass events and this current Christment event. I decided to make up this simple table list so that I know where I stood completing each step of task and what to expect next on the task list. Good way to pace yourself and target the next item and the next to get your coveted prize.

I’m just an average gamer so my progress was rather slow going. I have seen other players already moving on to the second set of task list for this War Robots Christmas event task. In my previous attempt, I just managed to reach the Orkan weapon. So this time I hope to go beyond this and get those pesky component weapon & robot types. This wasn’t going to be easy, and losing some good quality sleep time just to pass some steps on the task list, does this mean I’m getting to be a hardcore player too? 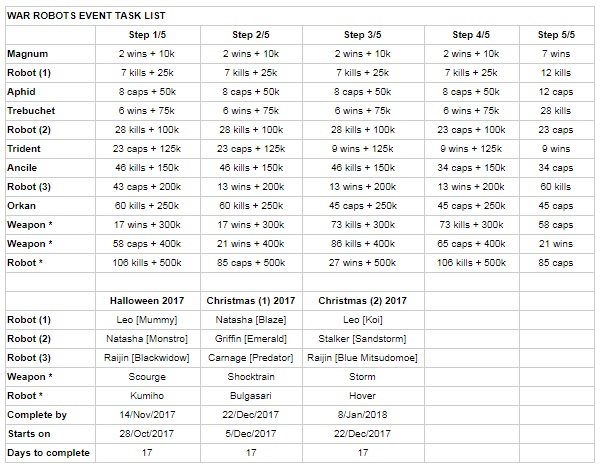 Playing the War Robots event, I came up with some basic strategy, which I noticed other players were doing it too. There were three basic task: winning battles, destroying robots, capturing beacons.

Winning battles was the most difficult as it needed to rely on your teammates to work together to win. Unfortunately, this event promoted different strategy on each different stage. If your teammates strategy was not in sync with your current strategy, the battle would be easily lost. On a normal game, I found it to be almost 50:50 chance of winning and losing. However you may end up with lousy teammates and stronger opposing team. And with the added different strategy for the event task, I found my winning percentage dropped down to about 30-40% chance. Sometimes I would get a bad streak and would get 10 defeats before achieving a single victory and then more defeats before getting victories again. And this made the game extremely frustrating!

How doing the other two task may affect your winning chance? The player or players would ignore about winning the battle and concentrate on destroying robots or capturing beacons. In some way, these two task may or may not help to win the battle, but more often than not, it did not. I have seen players including myself ignoring to capture beacon which was necessary to win a battle when trying to destroy as many robots as possible.

And when in beacon capture task mode, the players and yours truly would be less inclined to go blasting the red team robots into scrap heaps. Although it may be necessary to clear a path to capture beacon, but that’s just about it. I’ve even encountered some gentlemen understanding when faced off with a Cossack robot with no weapons. The player would change the beacon color, step off, I would change it back to mine, step off, the player would change it back, and vice-versa just so to rack up beacon capture points before another teammate decided to blast either one of us to kingdom come!

It was not necessary to win a battle to complete the task of destroying robots or capturing beacon as those were not the objective. Thus it would become very detrimental to other teammates who need battles won to complete that task. Sometimes to save time, players may leave early in the game when they found the game not in their favour or they just needed to complete a little bit of their task. For example they just needed to capture one last beacon or destroy one last robot to head on to the next step in the task list.

Pixonics might have come up with some penalty for players leaving very early in the game, but such algorithm checking were not without its drawbacks. Players may have a genuine need to leave the game early to attend an incoming call or do some other real world task that required their immediate attention. So such penalties might be good or bad for the players as well.

Anyway, for all you War Robots gamers, good luck in your quest to complete the Christmas event task and receiving your prizes. I think I’m going to lose much sleep from this!