Chinese New Year would soon be over and so would the War Robot Lunar event. This time round I didn’t want to stress myself out trying to chase those goodies. My previous chasing during the Christmas 2017 event did left me stressed out. The task list was really strenuous to get through and all I could achieved for part 1 was all the way to Orkan level. Leaving me too burnout for part 2, and was only able to strive up to getting a Stalker.

I decided to take it easy for the War Robot Lunar event. I’m not going the way of the hardcore players. After all this was just a game. No need to get all stressed up about it. If I get it, I get it. If not, no need to fret for not having those coveted robots and weaponry. Though I did find those Korean robots players highly irritating. The dash ability made it very difficult to shoot it down. In most case if the opposing red team has one or more of these robots, it would spell the death knell for my blue team.

It’s no wonder some players decided to self-destruct to leave the game quickly. Pixonics has instituted a penalty for leaving the game early. But there was still a loophole. If you ran out of robots, you could still leave the game early without penalty. And that’s what the players were doing if they found they were in the wrong type of game (needed beacon capture but ended up in team deathmatch etc), or too many strong robots in the opposing team or whatever the reason to quit the gameplay.

Pixonics also made another way to obtain the 10,000 components needed to purchase the newer weapons and robots. Though it was very much slower, but at least you would get it rather than impossible from the random unlucky spin. The gambling aspect was surely rig. Some players did a study and found the luck was never in the players favour. I believe the bigger the prize, the lower the chance of getting it. That meant each prize was not equal in chance for each slot. Anyway I didn’t hope much from the spin but still spun it whenever I have enough keys.

The War Robots now has component offers that you can use your gold or workshop points to purchase. Depending on the value of the equipment, some components were easier to get than others. So far I had managed to get Storm and Gust. Now aiming for a Scourge. You need to watch out for the offer as they have randomize its pairing. Collecting the required component points may take as long as a month before you could obtain your desired equipment.

So that means not too many players would have those powerful robots and weapons in the battlefield and that would give players with normal bots and guns some fair chance of beating the opposing teams with the sup up robots and weapons.

Anyway here’s the Lunar Event task list which I found on one of the forum boards. 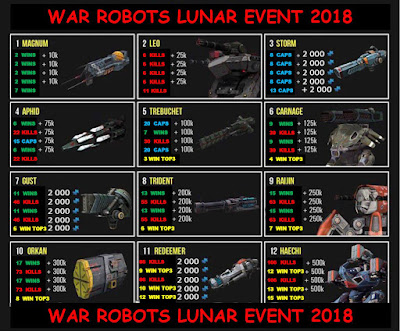 I noticed that after you get the Trebuchet, all the task became destroying robots and winning games and with the most difficult challenge at being in the top 3 slot after winning games.

So no more chicken runners aka Cossack while other team members were trying to win the game. Still trying to be in the top 3 and winning the games takes a lot more effort and very much dependent on whether your team was strong and the opposing team was a weak and whether you have the opportunity to rack up the damage counter to get into the top 3 slot. No easy task! For this to work, you need robots that were fast enough to capture beacons and strong enough to melt enough slag to rack up damage points!

Judging at my current take-it-easy pace, I think I would only achieve getting the Gust weapon. After all it was just a game. No need to get all stressed up from playing it. A game that was not enjoyable would not be worth playing at all.

All the best to those who do try to chase for it!