Proton cars more expensive in Malaysia than in Saudi Arabia 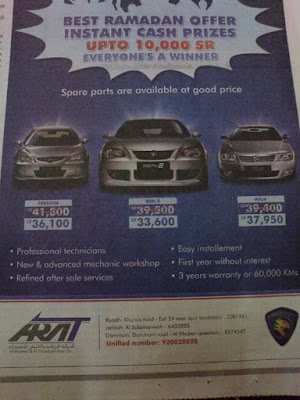 Received this in my inbox. This is a gripe against the current government in Malaysia. Yep, not many are happy at the way they are managing Malaysia. There is just too much leakages via corruption and lots of hanky-panky going around.
We all know we are paying way higher for Proton cars in Malaysia because the government is trying to protect its inefficient Proton car factory.

So when this reader saw the selling price of Proton cars in Saudi Arabia he sure jump into a furore than the government is cheating the people, the "Rakyat" so to speak.

For an idea the current Waja price according to the emailer is RM67,799.97 that’s 31,126.97 more expensive than in Malaysia. It seems the sales tax we Malaysia paid is to subsidize the selling price to overseas market. Something is not quite right here. Well as they say, Malaysia Boleh and in this case Malaysia Boleh for being able to sell overseas because the people here subsidize the Proton cars overseas in order to compete with other foreign cars.
Posted by Jan at 2/16/2011 03:54:00 pm