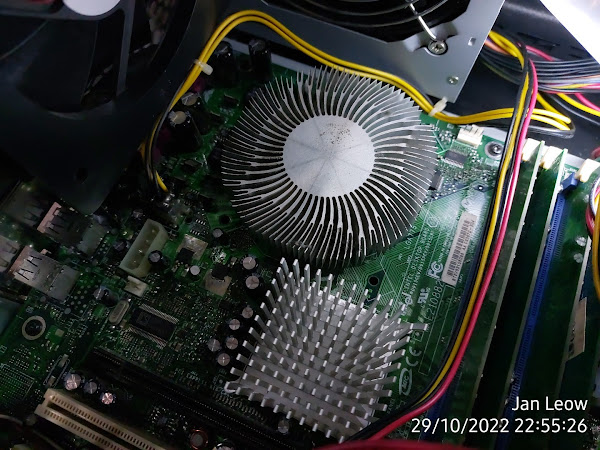 Next I went into BIOS and checked the hardware monitor, and found out the idle temperature was at 78°C! That’s a bit too high. Thinking perhaps the CPU thermal paste was not applied well, I wanted to redo it in the hope of improving the temperature. I did fix another PC of mine that was having high temperature by redoing the thermal paste and now sits coolly at an idle temperature of 35°C.

While trying to remove the heatsink, to my surprise, it wouldn’t budge! Using some force, the fan assembly came off the heatsink. But the heatsink just refused to be undone! I could see the motherboard bend from the force, trying to pull harder might break the board.

Checking online, it seems it is quite a common occurrence for heatsink to be stuck. It could be due to the thermal paste drying up and acting like a glue, or the suction force was so great that one could not just easily separate them.

To separate them, I found a few methods:

1) Using a hairdryer and cutter blade - the hair dryer to heat up the thermal paste to soften it, and using the thin blade to get in between the heatsink and CPU. Unfortunately I couldn’t do it, as my CPU was still in the socket leaving me without space to insert the blade, unlike the video showing the CPU somehow came loose from the socket board. Some people while attempting to yank out the heatsink also pulled the CPU out from the socket! So they could try this method to separate the CPU from the heatsink.

2) Another video I found suggested turning on the PC for about 15 minutes and letting the CPU heat up the thermal paste. After that, shutdown the PC and remove the power connection and attempt to take out the heatsink by twisting it left and right. Well it didn’t quite work for me. The heatsink was still stuck and I dare not do it further without a fan on the heatsink for fear of damaging the CPU. Also perhaps I only left it on for about 5 minutes rather than the suggested 15 minutes.

3) Using isopropyl alcohol. Well, I don’t have those around. Maybe I could use the 75% alcohol disinfectant spray. With all the Covid-19 germs around, I have quite a fair bit of these alcohol sprays which I think could be used. However there was not much space for me to apply. Perhaps I will try this later.

I know, this post hasn’t got a happy ending yet. At least there was some hope that I could get them to separate. Meanwhile, I placed back the fan and pressed back the components. I could get my boot up post screen and boot up my Linux OS. The PC still runs though with the elevated temperature I will need to be careful when using it.

I hope to update this post if my attempt to separate the CPU from the heatsink proves to be successful. For now, I just left it be for the time being.