How to Build A Strong Overall Champion in RAID Shadow Legends

I have been whacking RAID Shadow Legends for quite some time now and sort of have an understanding on how to build a strong champion. It feels great to be able to whack some bosses, get to an advanced faction wars stages and win some arena PVPs. Although my builds are not perfect, it did get me by.

Building a good champion is not easy. The number one most needed resource are Silver coins! I could never get enough of it and kept running short. You would need a hefty, and I mean really hefty amount of Silver Coins to push those artifacts and accessories to the max of level 16! 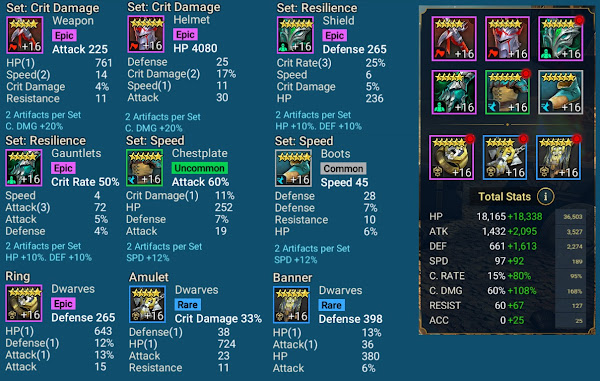 The other important resources include the Gems and Skill Books. Gems are important to max out the masteries and other functions. As for books, there is never enough for the legendaries and epic champions, and so have to do some rationing and save it for the better champions.

Show Me The Money!

When starting out the game, our champions are weak and basically we have to rely on some rares to get through some levels. The artifacts available are usually 3 to 4 stars. As the game progresses, you will need 5 to 6 stars artifacts and accessories. And be prepared to swap out the lesser stars and pay a fee to change it out. Hence I would try to develop the artifacts first and see what substats appear or improved before equipping it on my champion.

The first 12 levels would be easy to level up. For the remaining four levels, the cost of upgrading can be very expensive. It may take as much as one million coins to go up a level! This would spell out to about four million silver coins for the four levels if you went into an unlucky run! As such, with a million silver coins, I usually could averagely go up two levels. Imagine you have a total of 9 artifacts and accessories to level up from 12 to 16, that is definitely a lot of silver coins needed! And finally, you would need to glyph it just to get that little extra. And that needs a bunch of silver coins too.

So the never ending grind to farm silver coins does take a toll on playing this RAID Shadow Legends game! It is the most tedious part of the game. Of course you could take a shortcut and use real money to buy gems and coins. But I found the exchange value is just not worth it.

There are four types of champions in RAID: Attack, Defense, HP, Support. Each type requires a different approach when selecting artifacts and accessories. I found there is only one suitable way to build an all rounder champion. For the Weapon, Helmet, Shield artifacts, it is quite easy, they always have the Attack, HP and Defense base stat. However for the Gauntlets, Chestplate and Boots, there is only a particular way of choosing the base stat.

For Gauntlets, I will always choose Critical Rate. For Chestplate, either Attack%, Defense% or HP%. For Boots, speed. Any other stats for these artifacts, it is best not to waste your time and just dispose of them for silver coins. As such it can be so frustrating to acquire artifacts with just these specific stats.

I have tried out other base stat configuration and it just wouldn’t give your champions the required stats boost to power up! I have only successfully made one champion using a gauntlet with Critical Damage. But finding enough substat with Critical Rate was so difficult! I also have a champion that uses a Chestplate with Accuracy, but it did make his attacks weak. And I have no choice about it, because it requires a four piece artifact to get some unique bonus. And till now, I have not been successful to get the required artifacts to make a proper four set bonus.

A word about the Attack% vs Attack, Defense% vs Defense, HP% vs HP stat. The % stat gives a superior stat boost. As such even for substat, you should look for % as much as possible.

Another point about Critical Rate and Critical Damage, you can’t increase it by glyphing. So you need to ensure you can get a high enough value when selecting artifacts and accessories.

As for Accessories, for Rings I would usually go for Defense as priority. Sometimes I will go for Attack if the champion is weak in that area. And last priority for HP rings, only if it is necessary to increase it.

For Amulets, the best choice is Critical Damage as this is difficult to come by. Other stats for Amulet can be safely disposed of for silver coins. So far I have only one champion using defense stat for Amulet, so basically Critical Damage is the only best stat option for it.

As for Banners, depending on the champion weakness that I would like to bolster, then I would choose accordingly whether it should be Attack, Defense, HP, Accuracy or Resistance. However I would typically go for Defense or HP.

Target Stats to Aim For

I am sure many players will have their own ideas on what would be the ideal stat for their champion. To hit the required stats, you need to look for sufficient substat. And to do so, it is necessary to level up the artifacts and accessories initially and see what substats showed up or get boosted up before equipping them. Finding the right combination of sub-stats is the most difficult aspect to build a strong champion! This is where the jigsaw just wouldn’t fit! Concentrate too much on one stat, you would find the other stats to be lacking. There is no way to create a strong attack and strong defense champion (and the many other stats) at the same time!

Don’t forget, each champion has their own hidden modifier. Apart from the main modifier for the A1, A2, A3 skills discovered by players and published. I suspect there are other hidden modifiers as well. For example when being attacked, some champions are just way too squishy and succumb to damage easily. And some have poor resistance against debuffs.

So here are my minimum target stats:

Above are the numbers that worked well for me most of the time. It is still not the best. It gives me a solid overall champion to face most situations. It has good attack and defense. However, it won’t get me a speed nuker champion. And it would not provide good defense against speed nukers. However it is a good overall guide and provided me with an above average champion most of the time.