In my last blog way back in October 2020 when I bid adieu to RAID Shadow Legend, well, I made a comeback around September 2021 this year! With the Covid-19 pandemic still raging. I have some spare time while working from home. Apart from tinkering with reviving old PCs and Raspberry Pi, Arduino and learning Japanese with the Duolingo app, I decided to give this game another go.

Wait, what? Yes, I am doing so many multiple things, from work to hobby stuff, how to fit the time in between? Well, some things would slack. Like this blog, and I’m not tweaking my old PCs as much as before, having made them rather stable and hitting the limits of their capabilities. In fact I’m considering spring cleaning and disposing of some of the old machines. I’m still contemplating, so not quite there yet.

As for RAID Shadow Legends, it is really, really super-grinding! Having restarted since 3 months back, I will stop once I get the next free Legendary Champion. This time round, I had a better grasp of the game mechanics, and was able to boost up the power level of my RAID Champions.

RAID is a Fantasy Wild-Wild West

This game was all about speed. It’s akin to the Wild-Wild West quick draw gun duel. Whomever could start first and move faster, would have a good chance to win at the PVP Arena. And not just that, the higher speed also translated to better at clearing Campaigns, Dungeons, Faction Wars, Doom Towers and finally could score more damage against Clan Bosses and other dungeon bosses as well.

Of course speed was not the be all ultimate at winning. There was also the requirement for a good champion combination of skills, artifact & accessories set up, leveling up, ascending, masteries and max out skills. The latter would be the most difficult as tomes were hard to come by for legendary and epic champions.

Up till now, the gacha system did not yield me the most coveted legendary and epic champions. I had to make do with what I have in hand. My current most powerful combination comprise: 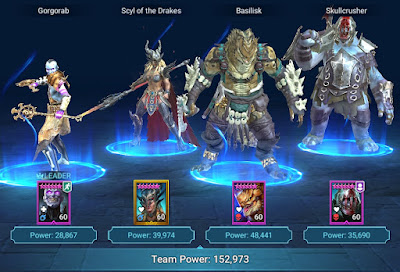 In terms of power, they weren’t the highest. I have other Champions that have higher power, but in a PVP Arena, combination was an important aspect that would determine whether you had a good chance of winning. I had to tear down artifacts and rebuild them with new sets as best as I could to make them stronger. This combination could fend off quite a fair bit of teams. However, as a balanced champion with good attack, defense and speed, I could never win against lower powered speed nukers, speed defenders, and against specific combinations of coveted powerful champions.

This time round I got the hang of trying to push up the speed limit, with the highest speed I could achieve with Lanakis the Chosen at 216 speed stat. Most of the time I would manage a feeble 170-180+/- for the level 60 champions.

My personal ranking for speed stat would be:

I have yet to produce my own speed nukers as it takes a herculean effort to reach it. I’m thinking that using full six pieces of speed artifacts might just do the trick. Well, that would be another time. Pushing artifacts to level 16 took up a huge effort. It needs lots of Silver, and I mean a humongous amount! And that would mean grinding, and more grinding to farm it. Practically playing the game an entire day!

I would usually run it in the background while doing my work. Sort of multi-tasking between work, game, and other hobbies. This is crazy! Well, it was not surprising gamers would give up the game halfway through. And so would I, soon.