I have decided to make a full stop playing Raid Shadow Legends. I have played this for one year from October 2019 till October 2020. I believe I have more or less understood the game mechanics. This was as far as I could go before hitting the wall.
Having played several mobile games, the endless upgrading sure did take its toll. And Raid Shadow Legend was really the worst of the lot that I have tried in terms of the number of hours I needed to put in to make any gains at the higher rank. 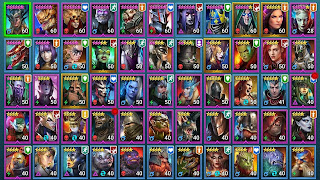 Raid Shadow Legends has a simplistic turned based battle game structure. You just whack, whack and whack the stars out of your opponents! The campaign element was just a simple linear battle all the way to the next powerful opponents, and if your team wasn’t strong enough, then grind through the lower levels to level up. In order to have a chance at winning, you would need a good mix of characters and very powerful artifacts and spend an extreme time grinding to upgrade your character level!
I wouldn’t really consider this a good RPG. It did not have a good story line as a proper RPG. Although it had a whopping 300+ fantasy characters each with different abilities and very beautifully rendered character graphics.
The main challenge of the game was in the arena PVP. And here was the real challenge, to fight against other players' team mixture. And it is here that you would face the ultimate frustration where some players had found some loophole where a weaker team could beat a stronger team. And more often than not, you would find players using almost the same characters to win in the arena face off.
I have tried to make my team stronger by watching YouTubers, but even with their tips, I couldn’t get anywhere near to the power levels of those players. What I have noticed in order to win, you could either create speed super nukers, speed defenders, and super defenders.
The speed super nukers rely on being first to strike with awesome powerful damage. This being a turned based game, whoever moved first will have this advantage. Coupled together with casting debuffs, the opponent would strike down your team before any of your teams got a chance to lay a finger. Where was the fun against such speed demon teams? Of course if you could somehow create such a team, you could feel the awesome power. However these types of teams usually had very poor defense. If your team could survive the first and second round of attacks, there may yet be a chance for a counterattack and some chance of winning.
The speed defenders on the other hand did not have awesome first strike kills, but due to their high defense build, they get to go against your teams for many rounds while shrugging off your attacks.
And finally the super defenders. They have average speed and average damage, but could absorb a lot of hits with a lot of healing but did not cause severe damage. Your team would go against them for many rounds and the challenge would drag on forever without seeing any end to the battle. There was no option for a draw, and all you could do was surrender and give the opponent the winning score.
For myself, my team was a balanced team, neither very strong, nor very fast, nor had very strong defense. I practically had no chance against the above three types of challengers. I've tried to make some semblance of the above champions, even with the tips that I had gathered online, I could not get anywhere near to any of the above types of teams.
The randomness of summoning good champions was pretty slim too. From what I could gather, only the most determined players would try many rounds of summoning in order to have a good chance of summoning powerful champion characters. I suppose any mobile games would be like that; to entice the players to keep playing just for the chance of gaining a strong powerful champion or items.
Perhaps my lack of strong champions and lack of strong items contributed to my lacklustre team. And I couldn’t find the loophole necessary to make a super team, plus the sad fact of having to do super grinding spending hours a day but still could not get anywhere ahead was the death knell of playing this game altogether.
I must say, having stopped playing this game was a great relief! I could now channel my time  to do better things!
Posted by Jan at 10/27/2020 08:35:00 pm