I have been trying to figure out which RAID Shadow Legends final mastery was better, between the Warmaster vs Giant Slayer and to a lesser extent, Flawless Execution. Trying to get the best bang out of the damage inflicted against the opponent from this final mastery requires a bit of calculation. Most players and guides would go for Warmaster, though sometimes they would go for Giant Slayer as well. So which one is the better bet?

Whenever I check the online guide by Ayumilove and Hellhades, they would sometimes pick this or that mastery and give their reason. But exactly which one is better in terms of actual probability and inflicted damage?

So I decided to fall back on my high school probability math and have the actual probabilities calculated out. Let’s start with the straight forward Warmaster Mastery. This mastery has a 60% chance of inflicting 10% bonus damage against other champions and a 4% damage against Bosses. The damage is calculated against the enemies Max HP. So the higher the target’s HP, the more bonus damage will be inflicted. However the damage will only occur once per round of your Champion’s turn.

A 60% chance is a good probability. More than half the chance each time you whack your target.

With the above table, you can see the comparison of the 10% bonus damage inflicted against possible Max HP of the target Champion. 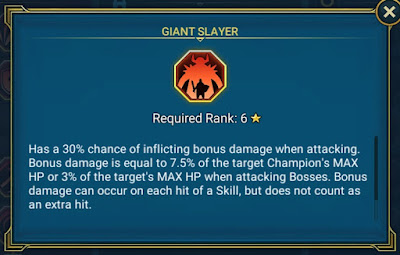 As for the Giant Slayer, the probability is lower at 30% compared against Warmaster’s 60%. At first glance this appears to be a poorer choice because of the lower probability and lower bonus damage of 7.5% against target Champion’s Max HP and 3% bonus damage against bosses Max HP. This would be true if your Champion’s skill only strikes once per round.

On the other hand, if your Champion’s skill strikes three times, this mastery would be worth considering. How so? Let’s do some mathematical calculations.

At 65.7% chance of bonus hits is quite comparable with the Warmaster mastery. However the damage will vary depending on whether there was one bonus, two bonuses, or three bonuses. From the table above, the frequency of bonus damage would just be mainly one or two. To get three bonus strikes at 2.7% would indeed be very, very lucky as the chances are just way too slim!

Using the above numbers, I think the Warmaster skill has a better advantage at inflicted damage because of the lower chance of getting 2 bonus hits for Giant Slayer mastery. In addition, not all the Champion’s skill has multiple hits. For example, Rhazin Scarhide A1 Bone Sword strikes 3 times. While its A2 Shear skill and A3 Bog Down skill only strike once, giving you only 30% chance of inflicting bonus hits, and a lower 7.5% vs that of Warmaster mastery of 10% at 60% chance.

As a further comparison, Champions that do 2 strikes per skill have a different probability outcome.

And finally, the Flawless Execution is a simple straight forward addition of +20% Critical Damage. This will be based on your Champion critical rate hit execution and you would get this extra 20% Critical Damage without additional probability calculation.

I use this with good effect with my Basilisk, especially against the spiderlings in the Spider’s Den dungeon and for Campaign.

Which Mastery? You decide

So with the above probability calculation and damage estimation, it provides a clearer view of how these masteries stack against each other. I hope the above details would help you in making the final decision on which mastery to choose. When it comes down between Warmaster vs Giant Slayer, I believe Warmaster has the better advantage.

The placard probably will not list restrictions to doubling down. If you aren't certain whether restrictions are in place, do not be afraid to ask the vendor, even should you're the center of|in the midst of|in the course of} a hand. \nHowever, the majority of of} blackjack games at present use six or eight decks. \nIn Las Vegas, casinos typically permit doubling down, an choice that 카지노사이트 permits you to double your bet, on any two playing cards, but other places may limit this transfer to just 10s or 11s.