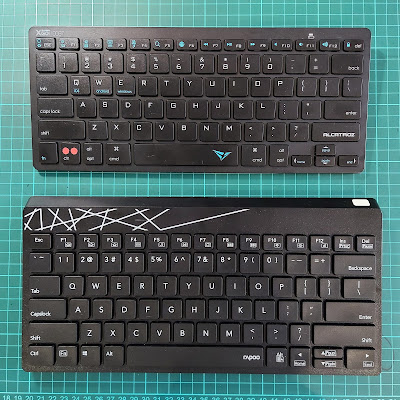 I liked the size of this type of wireless keyboard without the numeric pad on the right side to keep it small and handy to carry about. The price tag for this Bluetooth keyboard was reasonably acceptable and I have no complaints there. This keyboard uses two AAA size battery and the maker said it should last you a fair bit of time before it runs out. It has a simple battery indicator to show battery status when turned on as well as for pairing status.
Pairing was relatively easy and quick.I have paired and unpaired with several devices including my laptop, various mobile phones and a Linux PC with Bluetooth dongle, wherever and whenever I may need to use it.
The keys were a little stiff and makes lots of clackaty sound while typing, Probably not that comfortable for typing on an extended duration. As for the keyboard layout, all the keys are basically where it should be except for that two glaring mistake: (a) missing PrintScreen (PrtScr) button and (b) the Function (FN) key was placed in an awkward position where you would normally find the control (CTRL) button.
Without the helpful PrtScr button you would not be able to capture important screen info to send to someone. Certain websites may not render well if you tried to print out as PDF, so an entire PrintScreen would capture as is displayed on your computer screen. I could workaround with the keyboard shortcut Win+Shift+S. But somehow this little nifty button was much more superior. And of course Win+Shift+S works with Windows 8 & 10 only. It didn't work if you have an older Windows or running Linux or Chrome OS.
As for the FN key, for touch typing, this bad placement of the FN key meant that I would unconsciously reach out to depress it while trying to do control button keyboard shortcut. Trying to do a CTRL-C or CTRL-X for example would delete my entire highlighted sentence! Realizing my mistake that I have actually pressed FN-X or FN-C, I might try to undo with CTRL-Z and still made the same mistake of pressing FN-Z and that would wipe out the clipboard memory and lose the info that I was trying to undo!
Overall this keyboard is not what I had hope and you may need to consider seriously on the above two bad design before going for this keyboard. Since I have already bought it, I will try to use it as best as I could, and perhaps pulling out the badly placed Fn key might keep me using it for awhile. Though that would meant not being able to access commands that need the Fn key to work.

After thinking for awhile, I've decided using a wireless keyboard would be a better option. Bluetooth has another disadvantage especially while the PC is booting up. It needs the OS drivers in order to work. Wireless on the hand would work even without having the OS to be up and running. You could fiddle with the PC BIOS if you need to make changes before proceeding with the boot up process.
After searching awhile I decided to give this Rapoo 8000s Wireless keyboard and mouse combo a go. I didn't choose Logitech because of price point. Rapoo was cheaper although Logitech was more popular. Besides I was familiar with Rapoo as I had some of its mouse and keyboard.
This Rapoo 8000s also has a mini keyboard layout as well without the right side numeric keypad. The casing was a little more thicker than Alcatroz, otherwise the keyboard was still consider small and portable. It came with a  medium size mouse and one single nano receiver. The single nano receiver would save up one USB port if you have limited ports and that's quite handy for my little Raspberry Pi Zero that has only one USB port!
Buying online from the Lazada website requires a lot of scrutiny. The photos of the keyboard color ascent didn't quite match up on the actual item received. It's still the same model, just that the color pattern wasn't quite the same. I suppose that's the risk and downside of buying things online. You do get quite a good deal and cost savings versus buying from a brick and mortar shop.
The keyboard layout has all the keys as you would find on laptops and normal keyboards. No missing PrtScr key and the position of Ctrl, Fn, Win, Alt keys were all at the right places. The keys were very quiet while typing. The soft touch also makes it comfortable for extended typing duration.
The mouse on the hand, is not as sensitive with the Rapoo mouse that I have currently. However it still did its job. Probably not good for gaming. The mouse uses invisible laser, so you may forget that it was turned on if you were used to the older generation mouse that has a tell tale red laser light.
Both the keyboard and mouse uses a single AA size battery each. The box mentioned the batteries would last for a year. No way to know till the battery power is gone.
Overall, I'm quite pleased with this Rapoo 8000s combo set. I believe it to be more superior than the Alcatroz Xplorer Go! 100BT. Although I am comparing a Bluetooth device versus a wireless device, if your need is for a Bluetooth keyboard, it would be prudent to study the keyboard layout, touch feeling, etc apart from the price point before committing to your purchase.
Posted by Jan at 6/17/2020 07:24:00 pm

Hi Jan, thks for sharing. I'm using the XGo! 100BT keyboard & faced the same 2 problems you highlighted. Could you point out to me the keys (Win+Shift+S) I should use to printscreen pls? I don't see the Win key. I'm on Windows 10. Thks again!

Where is Win button on the keyboard?

I am using Alcatroz 300 BT keyboard and it is horrible. The bluetooth connect often gets disconnected and I have to reset it by taking off the battery. The keyboard doesnt have a power switch also. Made a bad choice by purchasing this keyboard.