I am still banging ahead with Pixonics War Robots mobile game despite considering to stop playing for quite some time. I suppose the idea of piloting mechs and busting other mech still appeals to me. From my last post, there were additional changes, which some players considered it as a move by Pixonics to glean some funds out of the players. Any additional stuff added requires an arduous uphill time consuming and costly upgrading process.

The amount of time I’m putting in to get those Ag so that I can upgrade the weapon and robot level is crazy! Now that I’m using Microsoft Arrow launcher, it has a screen time tracker so that hopefully I can control the time playing it. But you know, you just want to complete the daily task just so to get that pathetic small rewards!

The July event will be over soon within the week. This time round I weren’t as lucky in that I didn’t get a robot. I was fortunate enough to bag myself an Ares robot and a few weapons for the previous event. This time round I just get basically components which I would consider it as less useful, a couple of new weapons and two legendary pilots, which I felt weren’t that great. After all the regular pilots would just be as useful if not better.

In order to keep my sanity, I have decided not to chase for the new weapons and robots. If I was lucky enough for the random spin to get me something, great! Otherwise I just concentrate to level up my existing robots and weapons and try to find a good combination out of it. I don’t aim for Mk II, instead opt to target my robot to level 9 where the speed would be maxed out, and for weapons to be at level 10. That should give me enough robot durability and sufficient weapon damage to hold up against most players. I think this strategy is not too bad and I have managed to get in to Master League ranking despite not having robots like Spectre, Invader, Au Jun, Pursuer, Blitz and various powerful weapons.

The Ag resource upgrade requirement for the new robots and weapons are too outrageously priced! Depending on the pricing, I have to stop upgrading once I hit level 8 for some of the newer weapons. Better to dedicate the precious Ag for some other easier to upgrade items! 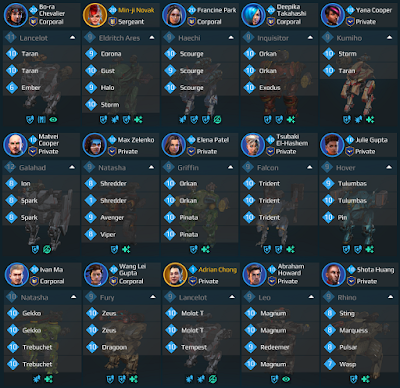 I’m keeping three hangars, each with a different purpose based on map size:

Hangar One is hard hitting CQB style brawling. The best stuff goes here. Close combat is fast and furious and it is also where you get the most Ag rewards. Unfortunately using this hangar for large map would be suicidal.

Hangar Two is for mid-range weapons and I used them a lot for the medieval Castle. This lot is also usable for those large maps and sometimes I do try it out on smaller maps as well. Usually newer lesser powered weapons for trying out goes here.

Hangar Three is for those large maps like Valley, Yamantau and Springfield. Scoring would be very poor for me because long range sniping and mid range blasting don’t get me much. And yes, I’m using pretty slow moving robots, pretty much sitting ducks against the newer agile robots when they get in close!

As for the pilots, a recent addition from Pixonics as well to spend all that hard earned gold, I would concentrate on promoting for Hangar one pilots and even then, probably maxing out at sergent level. Gold are pretty difficult to come by, and the fastest way to replenish is by paying for it. 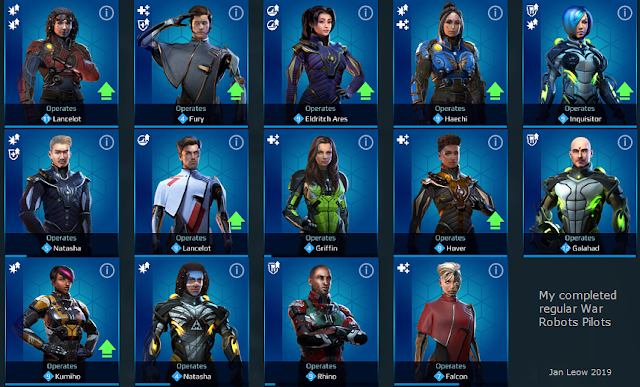 I think I have completed the regular pilot collection. I counted 14 in total (6 men and 8 women). Pixonic just randomly mix and match the names and background story and you get a very funny mish-mash names which I felt weren’t quite matching to the character features. I suppose trying to be all inclusive to make for an international cultural was a really weird concoction!

As for the Legendary Pilots, it was too costly to acquire but I got lucky from the July Event and managed to bag two pilots! Fortunately it matches with my current robot line up otherwise they would end up in cold storage. Frankly speaking, it isn’t necessary to hire legendary pilots, regular pilots would do just fine without chalking the high Au bill to hire them. Besides the regular pilots has one advantage in that you could assign them to any robots where else Legendary Pilot skill would be wasted if you don’t have the matching robot to assign them with it. 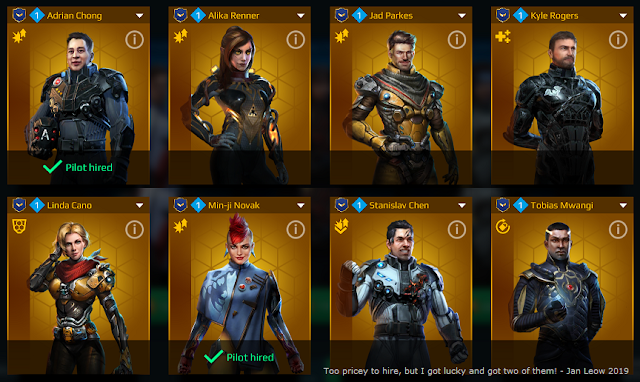 Of late, I noticed the pairing system can be most unfavourable. There are those death squads where the opposing red team consisted of fully squad players. I suspect they are friends sitting in a room playing together. Their coordination was impeccable due to their ability to communicate with each other, coupled with their aggressive play, the game would soon be over very quickly. Your robot mech would have absolutely no chance against them. Any foolhardy player who attempted to fight them off would be quickly dispatched.

Pixonic should take note of this and match death squad against another death squad for a more level playing field.

The best strategy against these death squad is to stop playing altogether. That means you stop deploying any of your balance robot roster when you know you are up against death squads. Because they would win, so let them win. But deny them the chance to collect Ag from the destruction of your robot and hopefully giving them an empty satisfaction of wins with low rewards. This is one way to reduce your frustration against going up against death squads!

You can sort of figure out if the opposing team is a death squad when they are so powerful and your robot was destroyed so quickly. Then try scrutinizing at their names and see if it shows the same squad team. You also find that even your home base would be quickly overrun by the red team, and you will know it is time to hands off deploying any robot. You can't quit the game due to the penalty imposed but you won't have to wait long either. Some of your own blue team mates may have the same idea and hands off deploying robots too and without any blue team robots on the field, the game would be over soon after. Hopefully by not playing it would give the death squads an empty victory.

Much as I like blasting up the opponent red team robots and having the satisfaction of mixing up a good robot and weapon combination and seeing it succeed. At the higher levels, you would need more real time, Ag and Au resources to level up. Playing too much is not good for your general well being, so do get a screen time app for some game time control. Once the event is over, I’m planning to reduce even more screen time. I think I have taken my set of robots and weapons as far as it could go. Trying to level up even more would take exponentially more time which I think would be better used for other activities.