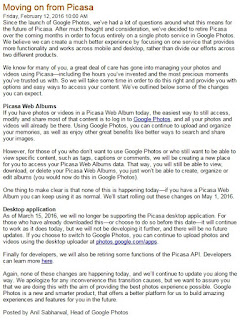 Google Picasa Blog made this post (http://googlephotos.blogspot.my/2016/02/moving-on-from-picasa.html) on Feb 12, 2016 during my CNY holidays. I read it with dismay that Google chose to close a service when they still have much work to do to improve their Google Photos. Shoving Google Photos service when it isn't well designed is really bad idea from Google.

Sorting, what sorting in Google Photos?

So what is just so bad about Google Photos? My main grouse (and also from many people judging the complaints in Google Photo forum) is its inability to do simple basic sorting by date from newest to oldest and vice-versa and by filename. How could the Google developers missed that basic function? Even when DOS first came about, we had that feature. But nope, not in this "highly advance" app called Google Photos.

For those who don't care how jumbled up their photos were uploaded to Google Photos, it won't affect them. But for those who want a semblance of neatness in organizing their thousands and tens of thousand memorable photos, now that is a huge problem.

Use the search, that's what Google is for, right?

So use the search to find your photos. Isn't that what Google is about? Try it and see. You will get more misses then hits. Search is great, but it isn't perfect. I even create description and tags in the photo information so that search got something to latch on while doing its search thingy but the search still misses its mark! With tags and description I can avoid using album (or collection as they now confusingly calls it) to compartmentalize my photo grouping. But when search is not doing its job finding the photos that I want, then it becomes less useful. It didn't happen in good old Google+ Photo Album. The older search could determine whether a picture fits into something in their algorithm and it could check the info and description as well as filenames to come up with a match. Whatever happened to their photo search algorithm in Google Photos? I suppose they didn't port over a good working search program from Google+ Photo Album and rewrote a newer but less effective version. Oh, c'mon, there is no SEO involved here. Nobody trying to game the ranking of their own private photos. We just want something that works. 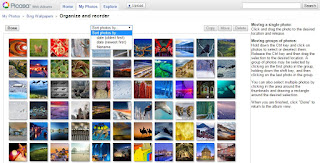 Bigger is always better. Wrong. Maybe good for my presbyopia eyesight, but not if I want at a glance to quickly scan through my photo collections. Again, it may be acceptable if you only have a handful of photos, but when we have thousands and tens of thousands of photos and we want a quick way to glance through what we have, smaller thumbnails would save a lot of time and faster than trying to use our index finger exercise by scrolling down, way down, down, down...

Hey, where is that ability to select by highlight? I could do that with the old Google+ Photos Album, heck, I could do that with keyboard shift and pagedown or arrow keys. But the new Google Photos requires that you use your mouse and finger exercise by clicking one by one... Of course you could click on the date to highlight the photos taken on that date, but what if you wanted a selected portion photos of that day? Say a hundred photos out of the 200-300 photos taken on that day? See the problem? Oh, pleeeaze, the Google Photos developers didn't think about that!


I hope the Google Photos developer team is listening to our grouses and fix the above feature by 15th March 2016 before they cut off and eventually shutdown Picasa web album service. The reduced functionality of Google Photos really irks us Google fan users. And if nothing is done to include such functionality only serves to drive users away to seek out better photo services elsewhere that meets their needs. And that's how the market works.

Ehh, for me its very bad news, cause Picasa was one of my favourite apps for working with photo. But I found out one service where we still can find latest picasa version https://yepdownload.com/picasa that still works great.

Thank's for this post! By the way, if you need premium WordPress templates for a business, click here https://wordpresstemplates.ch/

I still worl with picasa, app I take form yepdownload.com/picasa and I love it. And what service you use now?

Google Photo has fixed many shortcomings. So I'm using that now. Though it is still not perfect but very much better than when it was introduced. They came up with the sorting feature so that helped a lot; and the thumbnails are smaller now so I could view and scan through many photos at a go. I had to bombard my complaints quite a lot and hopefully others were complaining about the same thing for the "improvement" to be made.