Is Axiata Celcom Xpax data connection so poor? My Maxis line has not been able to get good signal strength in my home, and was wondering whether Celcom could be any better. The only way to know is to get a prepaid line and give it a test. Who knows? I might just get lucky!

Celcom was a pioneer for mobile phone technology and I heard they have one of the best coverage. Before I switched to Maxis some 20 years ago, I was using Celcom analogue mobile system. Nope, not the Motorola "brick" phone thankfully! It was the Microtac or something named like this from Motorola. Then came Maxis with their GSM system, and my friend persuaded me to change to Maxis and I have been with Maxis ever since.

I have never considered any other mobile telephone operator until now when I could not get any decent mobile signal strength from Maxis after moving to a new house. I recalled the previous owner was using Celcom line so I thought perhaps that telco should be getting good signal. 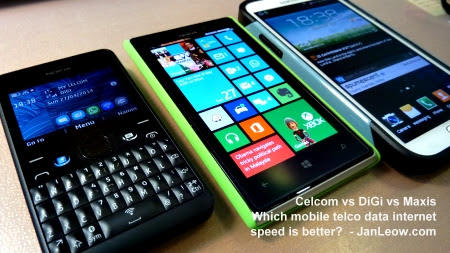 The only way to try without committing to a postpaid line is to get a prepaid card. The most general prepaid plan they have is the Xpax 24.

Prepaid cards are simple to subscribe in Malaysia, just pop in to any telco shop or even convenience store, pick a number that you like, and provide your national identity card for registration, and there you have a phone line! Easy!

Unfortunately plugging Celcom Xpax 24 prepaid card into one of my mobile, the signal strength was just as inconsistent as Maxis. I suppose the brick walls in my house were hardened and that blocks much of the signal as well as the cell tower was probably too far away making my house sitting at the edge of coverage signal.

I even bought myself a DiGi Best Prepaid card just to check and see how's their service coverage and data connection. To my surprise, DiGi's data connection was as good as Maxis.

I thought maybe it was just my area, bringing along my Celcom mobile to my workplace and elsewhere, I found out that if you are lucky, you might just catch a whiff of 3G/H connection, other than that, most times I just get 2G/E connection.

So basing on my observations, amongst these 3 main telco, Maxis and DiGi seemed to be giving the the best data connection speeds, especially in the urban areas. I could consistently get 3G/H+ data connection and quite fast download speeds too. DiGi has improved its coverage tremendously over the years and they are a telco to be reckon with. Celcom has first mover advantage, should have the best coverage, but their data connection is the worse so far for my experience. The Xpax prepaid that I have, I could not get any decent 3G/H+ connection at all. Most times, I just get E/2G connection.

Despite what their advertisements says, where is my 3G/H+ connection? Could it be because I’m using a prepaid that they don’t extend the 3G/H+ service for prepaid users? My friends Celcom postpaid service seemed to have no problem for 3G/H+ connection, so this is very strange indeed. I have tried to re-enabled the service, and even call up Celcom, but I still don’t get 3G/H+ connection even trying on several models of mobiles.

As a saving grace, Celcom Xpax has special data offering on their mobile internet. The RM5 for 50MB and RM10 for 150MB with a validity that will remain as long as your Xpax prepaid remain valid. The 500MB free WiFi is just an inducement to show some extra value, I have yet to find a Celcom WiFi hotspot for the places that I frequent. The mobile internet offering is very good due to its extra long validity, good for very low data internet users or people like me who want to keep the line and occasional data connection for testing purposes as well as for my android tablet which I'm using WiFi most of the time to be online.

As conclusion: DiGi and Maxis give the best data connection speed while Celcom has the poorest.

Related:
I needed to know the telcos data internet connection and decided to do a little speed test:
Data Speed Test: Maxis vs Celcom vs DiGi
Posted by Jan at 7/10/2014 11:47:00 pm