Celcom XPAX Prepaid SIM card must be upgraded to get 3G

I decided to pop in to a Celcom centre to try to find out why my XPAX 24 could only get 2G/EDGE internet data. A quick check with my phone number and it showed up in their terminal that my SIM card was only meant to be used as 2G.

I found it odd that the Celcom shop was selling 2G XPAX prepaid card when everyone else, Maxis, DiGi, etc were selling 3G enabled prepaid SIM cards. It seems like Celcom stock is slower moving compared with the other telcos. In order to have 3G/HSPA+ internet data connection, I need to change and upgrade my SIM card to a 3G version. And the shop that sold it to me didn't even informed me about it! And when I called up Celcom support sometime back, they were just as befuddle and didn't understand what was my problem. Why is it Celcom support so poor? Anyway,... 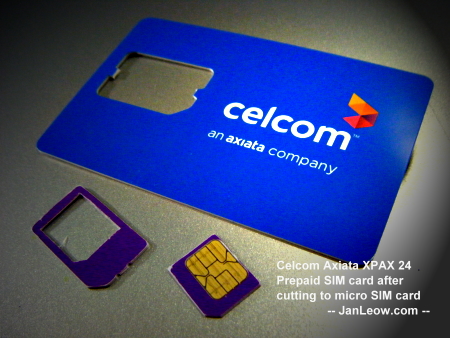 However the Celcom shop in Digital Mall was agent owned shop. Which means I need to pay them RM10 to swap to a new SIM card. Whether it was fortunate or unfortunate they didn't have a compatible standard SIM card for me. All they had was a cut out micro SIM card.

Apparently different prefix cannot be used for another prefix number. IE a 013 SIM cannot be used for a 019 and vice-versa. Although I was testing out the micro SIM for my old Nokia Lumia 800, a cut SIM with an adaptor makes it very difficult to slot into a normal standard SIM slot in my Acer A501 tablet or my good old Sony Xperia X10. The uneven cutting makes it very difficult to slide into the SIM slot and taking them out was just as difficult.

At this moment Celcom didn't have a factory cut micro SIM from a standard SIM card. A factory cut version has very smooth edges making it very easy to swap from standard size to micro size. Like the DiGi Best Prepaid SIM card that I had, I could easily slot it into any of my mobile or tablet devices.

So off I went looking for a Celcom Centre and while doing my sales round, I happened to end up in Subang Celcom CUBE. Changing SIM cards in a Celcom owned centre was much better, I didn't have to pay for the upgrade to a 3G SIM card. Apparently the 3G SIM card could also handle LTE. So in case I have an LTE enabled device I could theoretically use it.

However Celcom still didn't have a factory cut version of the micro SIM card with its adaptor. So I have to choose either a standard size or a micro size SIM card. I decided to go for the former as most of my devices is using the standard SIM card slot. Though I was eyeing the Asus Vivo Tab ME400CL, which uses a micro SIM slot, it was still under consideration. If I need to, then I will just have to cut it down to size.


Activation of the new SIM card was pretty quick, despite the staff telling me it would take 24 hours, it took more like 5 minutes. My old XPAX SIM card went dead on the spot, and I had to start using the new SIM replacement. I didn't even have my tablet to test it out and have to wait till I went home.

Slotting in the new Celcom XPAX 3G sim card, the Acer Iconia flashed 3G/H+ briefly before falling back to 2G. Don't know why, perhaps the poor mobile signal in my house could be a contributing factor. I don't have this issue at all with Maxis or DiGi line. Could be the old settings wrecking havoc with the settings.

To get the new settings, the simplest way is to type "SET" and send the SMS message to 20999.

As for my Sony Xperia X10, all I got was configuration error. No idea why, could be because it was an old mobile or what, not sure. Never had any problem with Maxis and DiGi. As for my Acer Iconia A501, the configuration file went into limbo. Decided to go with the old settings, which didn't go down so smoothly. I have to force my Acer tablet to connect with 3G only to get it to work, while my Sony X10 was still stuck with 2G/Edge connection.

Anyway, at least now I know what was wrong with my slow 2G/EDGE only Celcom XPAX connection now. Hopefully I could fiddle with the settings and get a steady 3G/H+ connection. But for now, with the 3G SIM card it should work to a certain extent for the high speed connection. That should count for something I suppose.

Related:
I needed to know the telcos data internet connection and decided to do a little speed test:
Data Speed Test: Maxis vs Celcom vs DiGi