War Robots recently had an update to their game which saw a new game map on a ship carrier, changes to the battle rewards and black market, and a couple of new robots and new weapons. Some of the changes I felt was much improved over the previous offering especially for the black market random chance.

I think with the new update, I would have hoped for some improvement on the game balance. There are still lopsidedness in the mix of team players ability and strengths. There were situation where the opposing red team has way too many superior players and made quick work out of the under strength blue team. It didn’t take long before the game was considered a lost cause. However due to the penalty of quitting the game early, I just have to face the bitter pill of being obliterated and hope that I have caused a high enough damage points to be at least in the top two spot of the losing team to avoid getting negative rating.

The rating was important so as to avoid dropping down to a lower league. A lower league meant less rewards collected from the Supply Line and loss of potential to collect the higher Battle Reward crates.

Call it bad luck or something, frequently I do get a string of losing streak, like having one miserable win out of six to ten games of losing. Maybe it’s because I’m in the higher league where the players were expert players and had more powerful robots and weapons! Too many defeats did make the game unappealing. 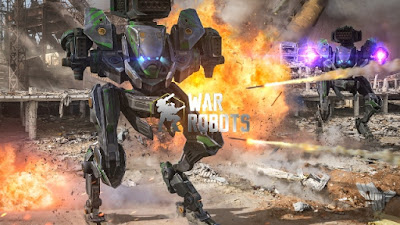 As for the changes to the Black Market random rewards, it was a big positive after the update. Now instead of getting useless quantities of random component points, you now get mainly gold and silver which was far more useful. In addition, the chance of winning a robot or a weapon was rather good. Although the robots and weapons given were the basic models, well it is still a good feeling. I managed to get a Gareth, several Vityazes and a Golem. Well if I’m getting too many of these, I could dispose of them and get some silver (Ag) to shore up my game funds.

The cost of upgrading the weapons and robots will become way much steeper and my funds has plummeted from a high of one billion silvers to current sixty million silvers. I’m still considering about upgrading my Galahad to level 12 which would take up thirty million silvers! That would consume way too much resources!

I have mixed feeling about the revised supply line drop. I was on my way to collect sufficient Inquisitor component points before the changed it leaving my tally hanging. I still need about 1200 plus point of which now I have to gather it from the offers. Mind you, the workshop points or gold needed just for 200 points was very expensive. Looks like my addition of a Korean Inquisitor robot in my collection would have to wait.

There were some new robot additions, like Raven, Hell Burner, Mercury. I think the Hell Burner with its suicidal self-destruct was more for fun playing as I felt it was less useful. Raven felt like a improved version of the popular Griffin with the double jump and same weapon slot configuration. There were also introductions of new weapons like Flux, Ballista which were just variation of the Gekko and Trebuchet.

Having struggled to accumulate component points to get the new robots and weapons. I have decided the acquiring of such component based weapons were not necessary for the enjoyment of the game. The time and cost to accumulate them were just too time consuming. In fact for the new game play Free-for-All, the older weapons fared much better!

This was a new style of playing where every player is for himself/herself. Hunger Games style where there can only be the last one standing! In team playing, you need to rely on other players to win the game. In this Free-For-All game mode, your playing skill together with the Robots and Weapon choice would determine your outcome with no help whatsoever from team mates.

And these was where I noticed certain robots and weapons were much better suited. Robots such as the ever popular Griffin, and heavy hitters like Lancelot, and robots such as Carnage, Fujin together with all the Korean robots like Kumiho, Haechi, Bulgasari and Inquisitor has the best chances. Short range, high damage and quick damage weapons were the best choice to use in this game. Such as Orkan, Pinata, Taran, Thunder, Storms, Gust, etc these were the best weapons to use. Long and medium range weapons, artillery and missile type as well as slow recharge type weapons would fare very badly in this game mode.

This game requires that you need to pound your opponent robot quickly because they would be using such high damage weapons. Totally one-on-one combat mode. Getting caught in a crossfire would make a quick end to your robot. Thus high armored robot gives you more time to fight, while speedy ones makes your slower opponent miss more.

Smaller maps game play were furiously fast, while larger open spaces requires that you take advantage of cover to get closer. Since there would be some foolish players using Hydra or similar ranged weapons, all you need to do was close the gap and make quick work out of them! Ranged weapons with their slower attrition rate were only useful in team playing where there would be other players covering your blindspot and slower recharge rate. In this Free-For-All situation, there were no teammates to rely on. Completely on your own.

And yes, the new carrier map, is long and narrow with lower and higher deck. In team playing, it was just direct confrontation with not much chance for flanking maneuvers. For beacon capture, strong teammates with combine firepower would make short work of the opposing red team. In Free-For-All mode, with enough hiding places, the game play was fast and furious. Though you would still get someone shooting you in the back when a surviving player random robot drop showed up behind you!

With all these new changes, I suppose Pixonic was trying to renew gamer interest. But there will come a time when gamer fatigue sets in, the player would throw in the towel and call it quits. Which seemed to be where I’m headed, with the never ending constant upgrade trying to be one up against ever powerful expert players. Would be nice if they have solo mission mode for a change.