No doubt 90% of the world countries has adopted GST (government sales tax) or VAT (value added tax) in order to improved their confers. The way Malaysia has gone about it was more like a force throat approach. From discussion with friends abroad, I get to know that the initial amount collected was something like 2-3% and then gradually increased. So the effect of GST was not too sudden and the people could get used to the consumption tax. But it was said by the men in the street, Malaysia government don’t have enough money, thus the 6% jump, and using the neighbouring countries as an excuse, “we are still lower”, but only by 1%. Terrible way of explaining to the public acceptance.

Some news publisher mentioned that out of Malaysia population, the amount of tax collected comes to about 10%. That means 10% of tax paying individuals and companies are supporting the 90% of the population in funding the government. 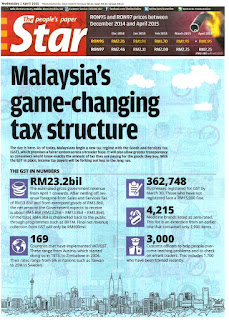 Is GST good or bad?

From my teh tarik talk with friends, some say it is good, because it mean everybody without exception must pay tax. And if you throw in the racial argument (which tend to creep in such talks and the current ruling coalition is not too shy to play the racial card and point out the disparity), most of the taxes were paid by the Chinese because they are the most hardworking of the lot. So now everybody gets taxed. No exception, very fair system. Actually it is not that fair, the rich won't feel the effect so much, while the middle income and especially the poor will suffer much from it.

But the GST is also the most confusing in implementation and accounting. I studied the calculation once while learning about accountancy, and it certainly gave me a big headache then, and certainly it is a very big headache now that I will have to do it for real! Thankfully I gave up accountancy, but still I have to monitor the situation. Being an employee in a small size branch company, I have to step into many roles.

And the week and especially the night before preceding the GST implementation, we saw a mad rush to purchase goods and items in order to avoid paying the 6% GST. Mind you, 6% is a lot especially if you were buying expensive items.

Effectively, in general our cost of living goes up by 6% although there may be cost savings for those items that were previously having a sales of more than 6% eg cars which were 10% reduced to 6%. But who purchases cars all the time? It is the daily essential living items and ubiquitous gadgets like mobile phone, that most consumers went a beeline to get!

Any hiccups in the GST system?

Yes for sure. Though the government says the system is fair and consumers will only get taxed once, in reality it might not be the case.

In an ideal condition, the input tax will match back with the output tax and eventually the consumer pays the 6%. Along the supply chain, the 6% should theoretically cancels out.

But there are some condition where companies or individual do not meet the criteria as a GST registered entity. So the real taxation paid by consumer could be an additional 12% although the tax invoice receipt will show 6%.

Now with the GST coupled with Ringgit depreciation by as much as 10% against the US Dollar, many goods has gone up in price. Our real inflation for the man in the street could be anywhere between 10% to 20%. Definately as citizen we will not be happy.

And to rub salt into the wound, the way the government uncontrolled spending and leakages certainly makes for a very angry and hapless population trying to survive the onslaught of price increase pressure.

Anyway, GST has comed, and we as citizen has no choice but to find ways to cope with it. Our real income has been dropping and there isn’t any effective way to increase our salary despite trying to work hard and provide for family. Such is the Malaysian life these days.
Posted by Jan at 4/01/2015 11:40:00 am