LiveScribe distributor Big'Ant in Malaysia is no more

Talk about bad timing! Big Ant (M) Sdn Bhd under the K-One Technology Berhad who was authorized distributor of Livescribe Pulse and Echo digital pen products has gone bust! Just at the time when my 2GB Pulse pen just ran out of ink and I thought of buying a refill ink cartridge. 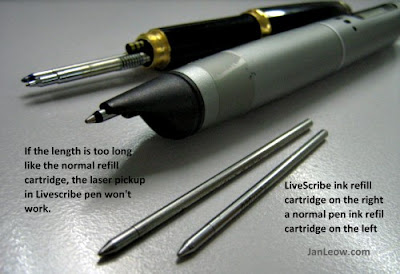 I found it strange when my usual IT haunt at All IT Section 14 PJ suddenly removed all the Livescribe products. At first nobody seemed to know what was happening and they weren't able to sell me any of the accessories and replacements. So I searched online and obtained the contact number for K-One Technology / Big’Ant division. Called them up but nobody picked up the phone. After several futile attempts, it dawned onto me that this company may have gone bankrupt.

Checking through other distributors, they too seemed to be in a blur until they too concluded that the agent must have closed shop.

That left me in a predicament. Fortunate for me I don’t rely completely on the Livescribe digital pen for my note taking during meetings and still sort of experimenting with it. I had some idea for using it to compliment my blogging online but have not come out with an angle for it yet.

However with the agent going bust, it means now I have to either order the accessories online all the way from America which would indeed be very costly or try my luck with Singapore.

For the Livescribe stationeries, I still got a backup option of printing it out (yes, I managed to solve the heavy buffer requirement and get a black and white print out from the good old Ricoh Aficio 2027 all-in-one copier printer). Besides I still got lots of stationery stock left so it is going to last me for a long while.

Unfortunately I didn’t get enough ink cartridges spare! Now that I’m down to my last cartridge, once it runs out, it is going to be expensive for me to obtain a refill.

I thought of using the normal pen ink cartridge refill, although the diameter was the same, but the length was longer. The laser reader in the Livescribe pen could not pick up the movement plus it was too long and not comfortable for writing.

I’m thinking I may just have to use a pair of pliers and cut the normal ink cartridge shorter to fit in the correct length. Cutting it may cause the diameter to alter. And the ink in the metal tube may spill out. Anyway, I will leave this as an emergency option. Perhaps if I happened to be in Singapore I will get the spare.

Well I did happened to be in Singapore and made a stop at Funan Digital Shopping Mall. I needed to top my car autopass at any 7-11 convenience store so may as well be here. Did a quick walkabout in Funan but I couldn't locate any store that had Livescribe stationeries and pen refills. I didn't have much time to hunt down those store mentioned in the comments:

Being a Friday, the causeway was expected to be very jam (well just my luck, I was totally caught in a jam despite using the 2nd link which was supposedly less traffic. Could have been far worse in 1st link I suppose).

Anyway, didn't really had time to check out each store and besides, the popularity for this digital pen in this region of the world may not be so great. So far I'm only using it more out of curiosity and novelty rather than seriously.

Besides, I've got a Samsung Note II with its S-Pen, I could jot down notes digitally too and store it away. Though not as nicely as Livescribe, but nevertheless it served its purpose. Carrying about extra stationeries in my bag did add weight. I might decide to do away with carrying around my Livescribe Pulse Pen and its notebook to reduce my briefcase weight. I'm still sticking back to good old ordinary pen and paper for note taking. If I need to store it away digitally, I could scan it.

Anyway, I had it for 2 years now, and the display is now completely blank due to its faulty display issues. Anyway, it was more of a novelty for me. Unlikely I would get another one for now.

Yes, they sell the cartridges and notebooks (livescribe) at South Asia Computers. You can also get it from some IT shops in Sim Lim Square. As well as a shop @ ION Orchard - I can't remember the name of that shop though. It's in the basement. Same price in all shops so not to worry about going to high end shopping area.

Are you still looking for a source for Livescribe refills? There are some generic refills that are the right length for sale on eBay.

Yes, I do need a refill. But not so soon as my last one still have ink. Buying from ebay or Amazon is not a viable option as the cost of delivery makes it uneconomical.

Besides, I may be hopping over to Singapore for holiday at year end so I may just buy a set then.

Meanwhile, my Livescribe pen display has faded to a point it is now very difficult to read it. I think eventually it will not work anymore.

Perhaps Livescribe digital pen was not so useful for me as I'm still trying to figure out the best use for it since I don't use it much for vocal recording.

Saw your comment from over 18 months ago.
If you still want LS accessories and ink refills, please buzz me. I am here in Kuala Lumpur.