Bluehost giving me the blues, looking for new web hosting

Eversince Bluehost gave me the heartbreak of telling me if my script cause a spike to their CPU for the third time, I will have to find a new web hosting company. I think that is rather stern and unfair, rather than chasing the customer away, they should try to help resolve what was wrong with my script installation. After looking around online, I found many negative reviews about Bluehost. And some place the power failure incident as a major negative point against Bluehost. Believe me, when all my web sites went down that day, I too had to wait it out for their servers to reboot. And they talked about world class backup generators and they weren't working that day with the excuse the power companies didn't allow them to use it.

Another down point is that Bluehost is one of the few web hosting companies that throttle your bandwidth, that means if a certain increase load to their servers due to higher website traffic, it would mean your web site will start to slow. Searching online, I found a review where a user who was a teacher, complained that her Wordpress website slowed to a crawl when many of her students were accessing her web site simultaneously. And I bet that the number isn't very high considering that a classroom full of student accessing her website requires throttling? 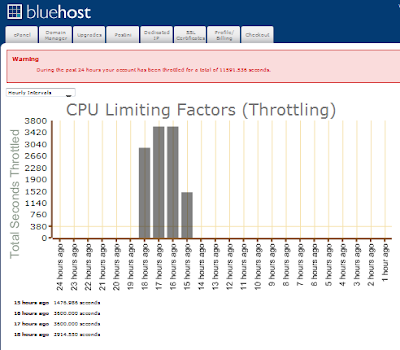 In addition, Bluehost is removing features from the CPanel that were given free, such as the new back up feature that don't allow individual SQL database backup. To have individual database back up you now either have to pay for it or do it manually via the phpMYadmin interface.

Since I still have about a year's worth of Bluehost web hosting, I guess I will have to stick up with them till near its end term. Meanwhile I'm doing some research as to where to move the rest of websites.

I have already moved my personal blog website to Cynet, a budget web hosting. But don't look down on this cheap web hosting, I think it can manage my web site traffic fairly well and has quite a load of features at a budget.

This time round I'm looking at data centres located around my locality rather than in USA. I will get speedier access for myself at least and at half the cost of Bluehost. However for overseas visitors it would be somewhat slower.

On the other hand I could invest more on webhosting cost and host my websites overseas. There are many good alternatives around, like Hostgator if I want unlimited storage and bandwidth, or look for metered ones that still give me good value. Siteground also looked interesting.

Of course price should not be the sole indicator of good hosting, the server speed, support response and assistance, etc should also be considered. Since there aren't that many reviews around, I just have to try my luck. Anyway it still very cheap.

Would you believe the cheapest Malaysia web hosting is only RM10 per year? Unbelievable! A storage of 500MB and a data bandwidth transfer of 10GB, unbeatable! I'm thinking of giving this Anjung Café Hosting a try. Perhaps on one of my lesser important web site just to see how it fares. I may just have to move another website 'coz I'm seeing some throttling by Bluehost to my balance websites despite moving out my JanLeow.com website from it! Poor form old chap!

Anyway, I'm still at my research and consideration stage. Still thinking whether to host it here in Malaysia or put up my web sites in an overseas location. Never keep all your eggs in one basket. Because if your account goes down, so do all your websites! So I'm going to spread my sites around the place. Besides, different IP addresses might give a good count on your SERP. Ah, so much for SEO practices.

I may just start some web hosting review once I have compiled enough information. Anyway this would be a future project. Will see how it goes.
Posted by Jan at 6/07/2011 11:23:00 am


so what hosting did you use?

what hosting in MY would you recommend?

I agree, the price in SG is like the price of liquor sold there. ;(

me, im really not satisfied with bhost. ;(

got warned. did tons of tweaks.. sharded my dbs. but its still slow as hell... haiz, maybe just got unlucky with the other users who are in my shared machine.

im thinking of getting a dedicated one, but with a reasonable pricing...

I still got a few more months to go with Bluehost. It is about time to completely shift my website because the domain needs a minimum of sixty days balance in order to transfer to another hosting company.

My current hosting are with
Anjung Cafe - coz it is so cheap!
Cynet - just for my JanLeow.com
IPserverOne - for something different, using Direct Admin rather than CPanel

Also considering FlexiHosting.
They are all shared hosting to keep my hosting cost down.

Well if your site traffic is very high, dedicated hosting is the way to go.

All the best to your hosting endeavors!