During my preparation for a super multiboot computer, I needed to know how much hard disk space to allocate for the various Linux, DOS/Windows and alternate operating systems. These were usually easy to check by visiting each of the distros websites. Anyway, I took some gparted partition manager screenshot of my hard disk, hopefully this would give a fair idea of how much space each distro used up.

If you have a large hard disk, you could allocate more space for each distro. However if you were using some of your older hardware, such as a 80GB, 160GB, 250GB hard drive, you may want to provide less space in order to install much more distro onto your hard disk. Or you might go crazy and install way much more than what I did! Well I did come across some extreme enthusiasts with so many OS installed in their hard disk!

Be warned, only do this on your spare computer! You never know when you may mess up your hard drive installation and start all over again! Some operating systems did not mix well with dual booting and preferred to take over the entire hard disk drive! 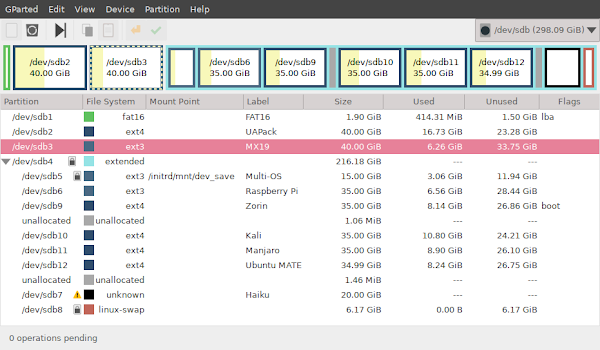 Based on the above analysis, a 20GB partition would be sufficient for these lightweight Linux OS, with the exception of Ubuntu Pack, that would need more. Probably 25GB or more for a comfortable experience. 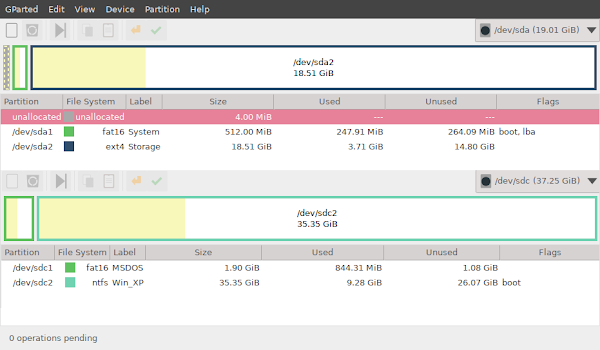 I had some very old IDE-PATA hard disk drives and decided not to waste them and use it to install the following operating system.

I had to use another hard disk drive for MS-DOS as it had problems recognizing my 320GB and wouldn’t install. I had the same problem when I tried FreeDOS as well too. Perhaps DOS wasn't designed to work with a very large hard disk, despite flagging the partition with lba, it still didn’t work.

DOS partition should be formatted as FAT16 and should not exceed 1.95GB. At 2GB to max 4GB, MS-DOS would give wrong information of the hard drive capacity and Windows 3.11 would not install because it thinks the hard drive has run out of space!

As for Windows XP, the installation took up almost 10GB after including the SP3 update. For a comfortable size, an allocation of 20GB might be okay. Since I installed it on a separate hard disk, I’ve decided to use up the entire space.

As for LibreElec, I could have installed it on my main 320GB, but I was actually preparing to place MS-DOS there and had prepared partitions for other linux and installed some OS already before finding out MS-DOS wouldn’t boot. The idea for LibreElec also came later, and this OS had to be installed first before installing other OS. LibreElec would take over the entire hard disk drive, and the LibreElec partition would have to be resized smaller to accommodate the other operating systems.

Judging from its usage after completing installation, you could probably get away with a resize to about 10GB for the storage partition. But if you intend to fill it with some music and movie data, then a larger size would be recommended. 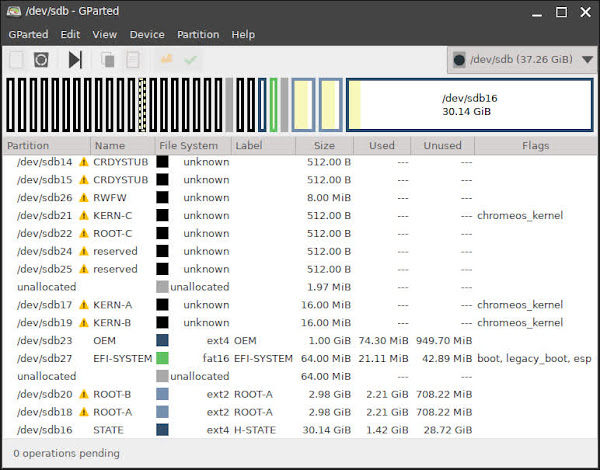 And finally on another old PC, using an adapter for an old laptop hard drive and converting it to SATA connection, I installed:

Installing Chrome OS requires unplugging the other hard disk to avoid them getting messed up. After the installation is complete, plug back the other OS and use grub-install on the main Linux GRUB2 partition to find Chrome OS to be listed in the GRUB2 menu entry. You would end up with 2 entries, and both could be used for booting into Chrome OS.

Chrome OS would give a warning when booting from another Linux Grub2. With the warning aside, Chrome OS ran without a hitch and didn’t have any issue with the other OS on the other hard disk drive. If you want to avoid seeing the warning, you would have to enter the PC BIOS and switch to booting the hard disk containing Chrome OS. But this method is less elegant and troublesome. If the PC supports it, you could also press F12 (or some other key depending on the motherboard) to select the booting device. For some reason, it worked for awhile and then it didn’t. So I went back to booting it via GRUB2. 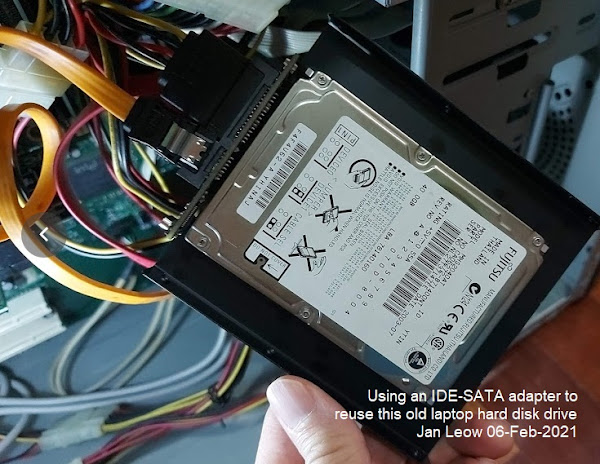 And finally, for the super lightweight Linux OS, I prepared about 15GB. For another old PC of mine, due to space shortage, I gave it about 10GB. I think it could even be smaller to about 5GB if I needed to allocate more space to other partitions.

These were the distros that I’ve installed in this partition:

All in, a total of 18 operating systems for my own ultimate super multi boot OS! Of course if I want to, I could slot the Chrome OS into the same PC and get 19 OS’s!