Log in to Microsoft Outlook Live Hotmail account today and saw the message flash. It mentioned that it will discontinue the multiple linked account feature. The message didn't show again after I re-login. Looks like in the webmail world of Microsoft and Google, lots of changes were happening!

Google decided to merge the storage partition of Gmail, Drive and Google+ Photos (Picasa), which seemed rather convenient, and now Microsoft decided to disable the linked account feature, which was rather inconvenient but improved security.

In the online world, there is always this trade off between convenience versus security and they are usually mutually exclusive. If you want more convenience, you will get less security and vice versa. Knowing that black hat hackers are constantly probing and attempting to break into any online systems and email accounts, and losing your email was a big deal especially if it was your main account for banking, password recovery and other important correspondence. I suppose giving priority to security over convenience seemed like a logical choice. 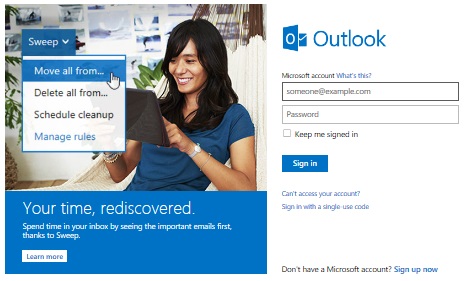 There is a webmail war going on between Google Gmail and Microsoft rebranded Outlook (previously Hotmail, then Live, and now Outlook). Sure there are many other free webmail offering around not to mention Yahoo! mail. The tug of war and the most innovations still came from Google and Microsoft, enticing users to switch from one to another.

In my opinion, disabling the multiple linked account feature is a step going backwards. Google has the "add account" and delegation of account option. So you could open several email account within the same browser. While the multiple linked account from Microsoft was very handy tool to switch between the various email accounts that I have with them.

The reason for several accounts was that I could separate from my emails between personal, work and other interest without having the correspondence messages mashing together in one account. In order to try out Microsoft Outlook, I forwarded one of my gmail account and tried to use it long term to see how useful it was. Having used it for almost a year, I'm still having mixed feelings about Outlook. Gmail still has many more features in comparison with Outlook mail, and Gmail still have the best search results for searching old correspondences.

By disabling the multiple linked account feature, I will now have to resort to using several browsers if I want to switch between accounts quickly. Having enjoyed using just a single browser to switch between email accounts for so long and going back to the crude way of having multiple browsers to view your messages without the time consuming process of having to logout and log in to your other Outlook account would be rather inconvenient.

Perhaps Microsoft could take a look at the way Google did its security for multiple account login. Instead of logging in into one account and then able to view all, Google still required that you log in with your passwords for subsequence accounts. And if those accounts were not access for a long time (about 2 weeks) it would be logged out and you would need to log in again to gain access.

Will just have to see how this goes. Perhaps enough users with multiple accounts would clamour to Microsoft for a way to access several Outlook accounts within the same browser and still maintain security, Microsoft would just have to come up with something. Until then, if you have multiple linked Microsoft email accounts and want to switch between them quickly, the only way was to use several browsers. 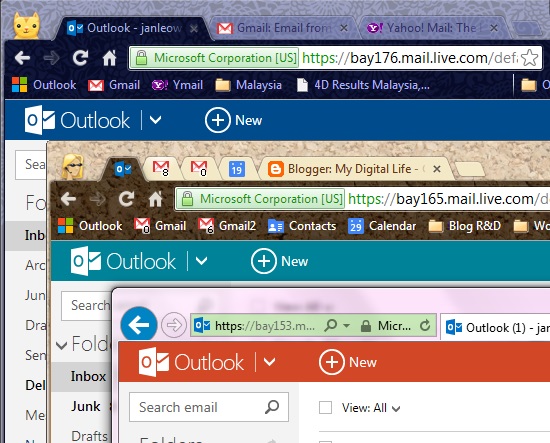 Just in case you were not aware, apart from the build in Internet Explorer in Windows, other browsers to use include Google Chrome, Mozilla Firefox, Apple Safari and Opera. These were the most prominent ones that I know of. There are other open source browsers used by Linux users and ported over to Windows (eg Midori, Konqueror, etc if not mistaken) but could be less supported by Outlook webmail due to differences in plug-ins and the way it renders the web page.

If you were a Chrome browser fan and have more than one Google account profile, you could actually open another Chrome browser running on separate process. But that would still mean two different Windows. I suppose it would be better than using separate browser software.

Based on my analytics, Internet Explorer was still the most widely used browser. IE has improved a lot since its bloated software days. However it did not have the separate profile like Chrome. So if you were just an IE user, you would have to start getting used to other browsers if you want to access your multiple webmail account.

Anyway, changes is always happening, be it online or in the world. Change is the constant, so we would just have to adapt as the situation presents itself.

That's it then! To access my other Microsoft web accounts, I will have to use another browser. My secondary browser of choice at this moment is Mozilla Firefox.

Such is the convenience vs security and security has won out this round for now.

You know your projects stand out of the herd. There is something special about them. It seems to me all of them are really brilliant! hotmail com