I have enough of this cough, cough, cough! It is so irritating! I decided to try Chinese medicine remedy for this dry cough instead. Since the antibiotics and other Western medicine is not working may as well try the Eastern medicine instead. It uses herbs and ginseng for treatment. 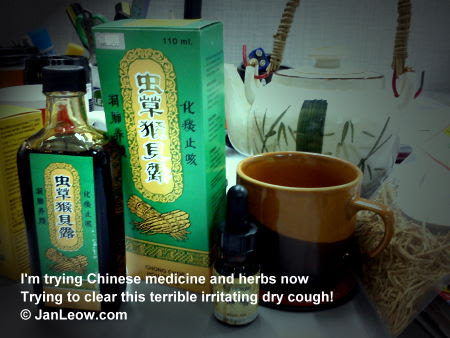 So a quick pop in to Vie Onn in Section 14 PJ, a quick consultation with the Chinese sinseh and he recommended this Chong Choe Hou Pui Loh cough syrup. Never heard it before but he says it is more effective than the Pei Pah Gou. Well I was using Pei Pah Gou and it did help to sooth my sore throat and reduce my cough at night, so if this was more potent, so let's give it a try!

Next he recommended some herbs call Pou Sam So, the English translation is American Ginseng Root, which didn't seem to translate it correctly. I guess the West still got a lot to catch up with it comes to Chinese herbal medicine, or I suppose there wasn't a proper English name equivalent for this medicinal herb. I was to take this RM10 pack of herbs, boil it with a pinch of salt and drink it. Since I was a little more desperate than that, I decided to just use the office kettle and pour hot water over it. It may not be so effective to extract the essence but will have to do for now. I got another pack to really give it a boil when I went home.

Later I'm going to give this coke + salt drink to sooth my sore throat. It helps some. And it would be much better than taking whiskey neat which I think would really make my throat more sore than cured though the alcohol would kill the bacteria just the same except that it's going to be tough on my throat!